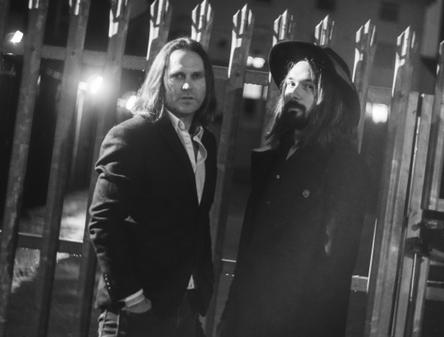 Under the Spotlight: Q & A with Indie Rock Band Percival Elliott

Take a wild journey with this Brit Rock Duo with their unique musical sound inspired by the likes of Queen and Supertramp!

Just from across the pond, Percival Elliott’s Olly Hite and Samuel Carter-Brazier signature style of beautiful lyrics and neo-nostalgic melodies have captivated listeners at sold-out shows all around the UK.

In BCNF's 'Under the Spotlight' feature, we get to know more about Percival Elliott, including who is their biggest inspiration, as well as, a discussion of their newly released music video “Betty” that contains a gritty rock sound with hard-hitting piano melodies that will leave you wanting more from this creative indie band.

Bridget Campos News Features: How did you guys come up with the name of your band, Percival Elliott?

Percival Elliott: Well, that was Sam’s idea. My father Edward Hite found an old wood and brass bound box in my grandma’s house, it was hidden in a long case clock at the entrance to the Drawing room, the clock stopped so my father got a man in to fix the antique, only to find inside this hidden time capsule all locked up.

My father couldn’t believe what was inside, old photographs, inventions and letters from my great grandad Percival Elliott. He was an inventor in the late 1800’s, he had a sweet factory and subsequently the first ice cream emporium in Brighton, England. Quite the eccentric! I remember when I was young my grandma telling me stories about Percival, how he would travel for days on end looking for the next big thing to invent and market. He would go missing for days on end, legend has it that he was a believer of time travel and a dear friend of Nikola Tesla.

BCNF: What made you both come together and create this duo band?

Percival Elliott: Fate it seems, both Sam and I are keen antique fans, I had an Antique 1920-1930 Swiss Six-Tune Cylinder Music Box in Rosewood that I was looking to sell, and Sam had looked me up. We ended up trading as he had a Fine shipbuilder's model of the 2nd Marquess Conyngham's Royal Yacht Squadron steam schooner 'Helen' probably aged around 1872, it was a fair swap and more importantly we became good friends and started writing together.

BCNF: How would you compare your musical sound to other artists?

Percival Elliott: Just good heartfelt songs, we are interested in writing music that can make the listener relate to and believe in.

I wouldn’t say it’s a new format, but I will say it’s not disposable like so much out in the world today.

BCNF: What can readers expect from your first album, Save Your Soul?

Percival Elliott: Love, addiction, pirates, and salty water. And much, much more.

BCNF: I particularly like your last single, “Forever”. It has a soft instrumental melody to it. How would you describe your newest single, “Betty”?

Percival Elliott: “Betty” is the naughty sister to “Forever”.

BCNF: You have so many sold out shows in the UK. Have you ever considered touring in America?

​
Percival Elliott: Oh yes, I spent a little time (pre-Percival days) playing at Hollywood bars, venues like Hotel Cafe, Witzend, and Villains to name a few... love the American audiences, they seem right up for live music. We would love a tour in good time.

BCNF: Lately you have gotten a lot of buzz in the music industry. How does it feel to get acclamation from such popular publications like The Vinyl District, Clash, and The Huffington Post?

Percival Elliott: Yeah, very cool. It’s great when all this hard work starts paying off. All we want is our music to be enjoyed by many and this seems to be happening. Exciting times!

BCNF: You have collaborated with several high-profile artists such as Fatboy Slim. Is there any other band you would love to work with?

Percival Elliott: Elton John or Father John Misty would be the perfect jam in our minds...need we say more.