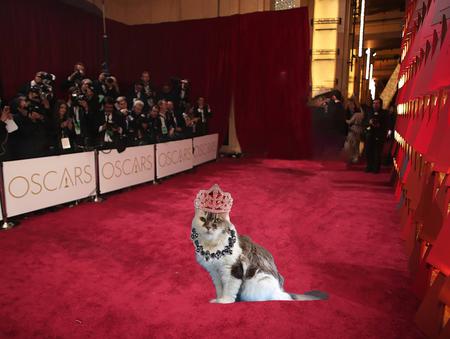 World's famous kitty, Sabrina Pound, striking a pose for photogs at the Oscars

Under the Spotlight: Q & A with Celebrity Feline Sabrina Pound

This Fancy Kitty Is Making Her Mark in Hollywood

The world's most popular feline, Sabrina Pound, is making a name for herself in the Entertainment world. You could say she is in a CAT-egory all on her own. We had the opportunity to catch up with this Diva for a short Q&A recently.  But first here is a some of her storied history.

She was born and raised in Rego Park, Queens, New York City. The oldest of four, Sabrina was an exceptionally beautiful and outgoing kitten. She spent her youth performing in various school plays and Community Theatre. After graduating high school, Sabrina attended The London Shakespeare School of Drama where she studied under the tutelage of world-renowned actors, directors and producers. She graduated from the school with a BA (Hons) in Acting, having majored in the History of Drama.

After a short stint in an uncredited role in a West End stage production, she returned home to the States and quickly began landing movie roles. Her first starring role was in the movie "Pounce" as crime fighting detective Lana LaPaw. She next went on to star in "Camouflage" as top secret agent, Agent Whiskers. Following "Camouflage", Sabrina’s long-time dream of making an historical, epic film became a reality when she wrote, directed and starred as the heroine Sabrina Tanaka in "Sayonara Sabrina". The movie won five Movie Excellence Awards (MEAs), including for Most Excellent Movie and Most Excellent Actress for Sabrina.

Sabrina also wrote a best-selling “personal empowerment” book based on the commencement address she delivered at a major university. She sings and dances, including in her perennially sold-out Las Vegas musical, The Pound Review. She also established her own charitable foundation and is very involved in philanthropic activities.

As Sabrina continues on her journey, her many fans may be left wondering, “What’s next for Sabrina Pound?’”  Below are some answers.

I am Sabrina Pound (TM), the Former Shelter Cat Turned Hollywood Superstar (TM).  I am the world's most captivating actress, winner of numerous film awards and an exquisite beauty whose face has adorned magazine covers all over the world.

2. What is your favorite activity?

Acting is my greatest passion. I love expressing myself through the characters I portray.


3. What is your favorite food or treat? As a movie star do you have a personal chef?

As my fans who follow me on Facebook know, I try to eat a varied diet. There are the salmon croquettes and pies made by my personal assistant (PA) Michelle, green tea and the whole wheat toast with almond butter and green smoothies I love having for breakfast. I have a personal chef and a nutritionist who work together to plan and prepare my meals.


4. Do you have any special abilities?

Why acting of course.  I also sing and dance in my perennially sold-out Las Vegas musical, The Pound Review.  And, being an expert leaper and jumper allows me to perform all of my own stunts in my movies. Next time you're watching an action scene from one of my films, look closely. It will be me who is jumping through the air or diving into the raging river.

I have several homes now, including my Southern California home, my New York City apartment, and my Tuscany (Italy) villa.

6. What is your favorite thing about yourself?

How I can take a role and become the character I'm playing, and bringing it all to life on the big screen.  Yet despite my beauty and incredible acting talent, I still see myself as just a humble, hard-working actress.

I've wanted to be an actress ever since I was a kitten.   I tried out for the role of Juliet in my elementary school’s production of William Shakespeare’s Romeo and Juliet. I got the part and the show was a resounding success. As my school principal recounted, I received more standing ovations than any student ever had. I knew then that acting was my destiny.


8. Do you have a blog and/or social media accounts?


9. What is the best part about being a famous movie star?

Having such amazing and supportive fans.


10. What advice would you give to young aspiring acting felines?

Get as much acting experience as you can. Whether it's a school play, summer stock or community theater, the more experience you have the better actor you will be. Watch every film and attend every play you can. Even today, I am always striving to hone my acting craft and become an even more amazing actress. 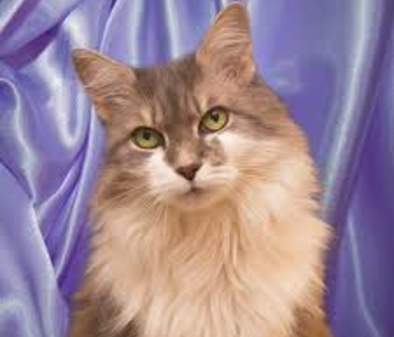