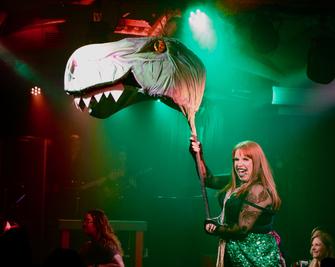 Genetically engineered dinosaurs roaming freely on a remote island turned wildlife adventure park that’s soon to be opened to the public-- what could possibly go wrong?

Rockwell Table & Stage’s UMPO series is at it again with a comedic/musical spin on another 90s throwback film, Jurassic Park. The 1993 blockbuster, sci-fi movie directed by Steven Spielberg stars Sam Neill (as paleontologist Alan Grant), Richard Attenborough (billionaire and theme park creator John Hammond), Laura Dern (as paleobotanist Ellie Sattler) and Jeff Goldblum (as mathematician Ian Malcolm), including Seinfeld’s Wayne Knight and Samuel L. Jackson as lead computer programmer and chief engineer for the park, that are supposed to keep the dinosaurs locked away from endangering visitors. Of course, nothing goes as planned when you are dealing with dangerous prehistoric creatures, so now these specialists and the inventor of the park alongside his two grandchildren, Lex and Tim Murphy (played by Ariana Richards and Joseph Mazzello) must survive until they are able to escape the island unharmed.

Ever since the film’s release, Jurassic Park has become a $5 billion-dollar franchise with several sequels and even an adventure water park ride from Universal Studios that replicates scenes from the movie and the adapted book by renowned author Michael Crichton. In celebration of Jurassic Park’s 25th anniversary since its release, Kate Pazakis’s UMPO series debuted their own amusing version of Jurassic Park with an all-star cast of talented singers/comedic actors and, not to mention, a live band to add to the mix that takes the audience back in time with many favorite classic hit songs from Hall & Oates, Salt-N-Pepa, Sia, to other jams that fit the setting such as Steppenwolf’s “Born to be Wild” and Guns N’ Roses’ “Welcome to the Jungle”, including a barrage of pop culture references during that era.

Attendees got a kick out of the interaction between the actors riffing at one another’s character--all the while trying to maintain composure without laughing out loud. Think of it as watching an SNL taping in person. Of course, when a show is live anything can go wrong and yet the actors still stay in character, or at least try to. Michael Thomas Grant does a fantastic job at replicating actor Jeff Goldblum’s signature stammer. He especially got the most laughs with his character oozing of sex appeal that is the definition of Goldblum by constantly rubbing lotion on his chest, seducing Ellie (played by Lesley McKinnell), and shamelessly plugging his other live show every Wednesday at Rockwell Table & Stage.

Also, making his first appearance on the UMPO series, former background vocalist Dedrick Bonner was another actor that stole the show with his impeccable impersonation of Samuel L. Jackson’s character as a high-strung, angry man, that often blows up with expletive rants. Just his reciting the famous movie lines from Pulp Fiction and Snakes on a Plane alone are worth seeing this hilarious musical for yourself.


The UMPO Jurassic Park will run til Saturday April 28th 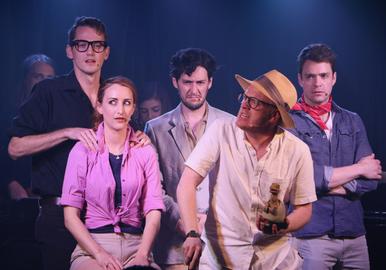 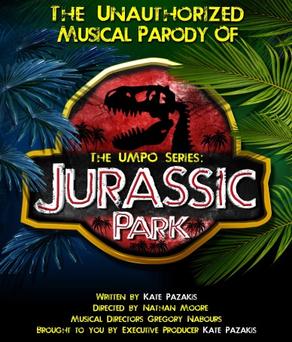