This year, Crumble Catering and Celebrity chef Wayne Elias will once again kick things into high gear for the special event with a little help from Third Michelin star owner of El Celler de Can Roca in Northern Spain, Joan Roca.


The over 1,000 sumptuous five-course dinners will be served on-site at the West Hollywood Park in West Hollywood, CA where all the action takes place, with a plethora of big screens broadcasting the live Oscar telecast on March 4th. And much like the A-list stars that will show off their stunning outfits, sizzling the red carpet for the after party event; these top chefs will dazzle guests with beautiful dishes by incorporating cutting-edge techniques and using various ingredients that will leave a lasting impression on the most discerning group of assembled VIPs and donors.

Such dishes will include: Arugla Salad with Comté Cheese, Pickled Onions and Curry-Coated Walnuts. Main courses include Sea Bream with a Chardonnay Sauce and Lemon, Truffle and Hazelnut Gnocchi; and Filet Migon with Red Wine, Olive Oil Mashed Potatoes, and Farmers Market Vegetable Puff Pastry. Also, there will be a Vegan option that includes a Cannelloni and Consommé Soup that's prepared at the table, French style. Along with a wide array of sweet & sumptuous desserts, Chef Wayne will also be serving a 15-year favorite, his Grilled Raisin Bread with Mascarpone, Gorgonzola Cheese and Asian Pears.

Chris Diamond, (shown in the above photo on the right-hand side), is the co-owner of Crumble Catering and the Los Feliz restaurant Rockwell: Table & Stage, commented, “Going into our 15th year working with the Elton John AIDS Foundation for their annual Oscars soiree has been nothing short of an absolute dream come true!”

Created over 25 years ago, The Elton John AIDS Foundation has so far raised more than $400 million over the past two decades to challenge discrimination against people affected by the epidemic, prevent infections, provide treatment and services, and motivate governments to end AIDS. (It was reported that this star-studded event alone had raised $5.9 million for the Foundation's battle to end the AIDS epidemic.)

​And what will make this night even more spectacular is the true dedication Chef Elias undergoes by taking a whole year to plan out this one-of-a-kind menu, but each time him and his team always seem to outdo themselves, while making it look so easy.

“It’s a true test of nerve and skill having to prepare such a large amount of courses for some of the most recognizable people in the world…I am proud to serve alongside my hard-working team,” said Chef Elias 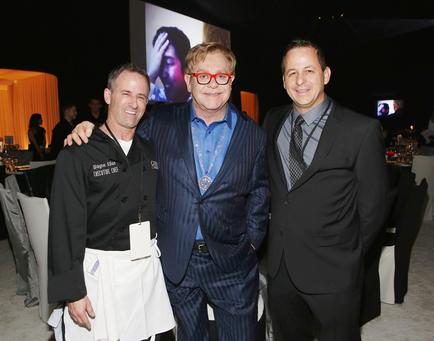