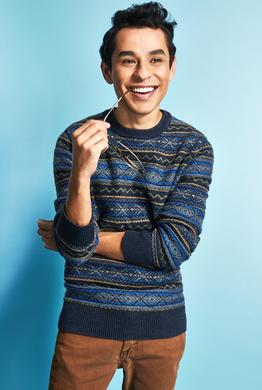 Rudy Martinez: Interview with the Co-Star of ‘Jane the Virgin’ & ‘Dear White People’

How a childhood interest in puppetry led to a successful career in Hollywood!

Born and raised in South Pasadena, California, Rudy Martinez got the acting bug at a very young age and was determined to make it in the entertainment industry by delving into the arts and perfecting his craft in theater plays, musicals, clowning, and puppetry. Eventually he landed a recurring role as a host on Disney 365. After being signed with an agent during college, Rudy hit the ground running with his acting career and landed his first television role in iCarly. But he is best known for his recurring role as Rudy the Production Assistant in the smash hit show, Jane the Virgin.

While Rudy is proud of how far his Hollywood career has gone, he has not lost his love for being on the theater stage. Recently, he wowed theater goers at the Garry Marshall Theater in Los Angeles, CA by showing off his puppetry skills as he played Wood Boy in the grown up but whimsical spin of the beloved Pinocchio character in, Wood Boy Dog Fish.

In an exclusive interview with BCNF, Rudy got the chance to talk about his most recent role in Netflix’s new comedy-drama, Dear White People, and how the show tackles today’s current issues of racism and other types of discrimination, but in a more humorous tone. Also, Rudy tells us why he developed an interest in puppetry and what his dream job would be.


Bridget Campos News Features: Can you tell us about the show, Dear White People, and your character Wesley Alvarez?

Rudy Martinez:Dear White People is about a group of black students that attend an Ivy League University that is predominately white. And in my opinion, it’s very funny, timely, and has a lot of satire on problems today, especially involving racial politics in everyday life. My character Wesley is a smart student with a philosophy major and self-proclaimed geek. He meets Lionel Higgins, who is an opposite character of him and they hit it off because they are both outcasts from their respective communities. Eventually a little romance evolves between the two characters.

BCNF: So, does the show joke about cultural stereotypes without being too offensive to viewers?

Rudy Martinez: When people first see the show pop up on Netflix and see the title, they might be put off. However, after watching it they realize quickly that the show is not meant to bash Caucasians in a negative way. In fact, the title of the show is the title of the fictitious radio show, so it’s a show within a show. In a broader way it examines a lot about racial politics but in a satirical way that really opens the discussion about racial politics today.

BCNF: Do you think the show should have gotten an Emmy nomination?

Rudy Martinez: Absolutely! There is so much going for this show. It is beautifully directed, and the acting is phenomenal. The cast really brings their all, so it is moving to see.

​BCNF: Is there a possibility your character will be on the third season of Dear White People?

Rudy Martinez: I really hope I do. But we’ll have to wait and see when the third season is out.


BCNF: Now you have been in so many popular shows like iCarly, Heartbeat, and Jane the Virgin. What’s your favorite show you have ever worked on?

Rudy Martinez: I would have to say Jane the Virgin. I’ve had a recurring role for three seasons on that show. And I really feel welcomed into the family that recently wrapped up its fourth season. It’s inevitable that with a show like that you become a little family. I feel like I’ve grown up with the show that has progressed all these years.


BCNF: What is your favorite hobby you like to do when you’re off the set?

Rudy Martinez: OMG! I have so many hobbies (laughs). I love going to theater houses, cooking (especially baking), and entertaining family and guests.

BCNF: Since you strongly support the LGBT, I heard you and your husband set up a scholarship at UCLA to benefit LGBT writers. Can you tell us more about that?

Rudy Martinez: Sure, it’s called The LGBT Voices Award and anyone that is into the arts (television, film, and theater) and has a passion for writing is eligible to apply and submit work that not only moves us but supports our community by bringing up the discussion on the impact gender differences have on our society, and how they would creatively translate that into film or on stage.


BCNF: While in UC Santa Barbara College you got a research grant on puppetry. Why did you have an interest in that?

Rudy Martinez: I’ve always loved puppetry. Maybe watching The Muppets as a child had something to do with it. In college, I did get a grant to study it and got the chance to travel to see different puppet theater companies.


BCNF: Who is your favorite Muppet? And would you like to work on the show Sesame Street?

Rudy Martinez: My favorite Muppet character would have to be Animal (laughs). Yeah, I would like to be on Sesame Street. I did a performance at Jim Henson’s studio recently and it was a benefit for Caroll Spinney, the puppeteer who plays Big Bird. So, I got to see The Muppets perform live and hang out with the puppeteers. That was a dream come true.