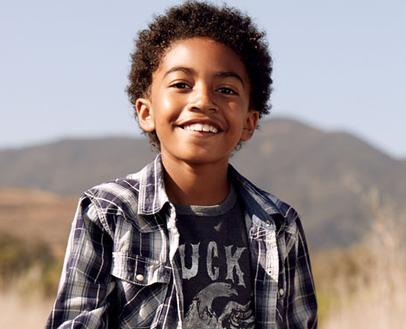 Miles Brown: Interview with ‘America’s Got Talent’ Contestant and Star of ‘Black-ish’

How Hollywood has Embraced ‘Baby Boogaloo’

The multi-talented child star, Miles Brown, has taken the world by storm with both his rapping and dancing skills. But lately Miles has shown he has some pretty good acting chops on ABC’s Black-ish. Not bad for this 10-year-old’s first ever series.

“I’m just having fun,” Miles admits and attributes his success to staying in school and going to church every Sunday. But the one thing Miles actually looks forward to during his downtime is being with his family and friends.

Miles first started off as a hip hop dancer at the tender age of three. His favorite dance move (mostly shown on his Youtube channel:babyboogaloo1) is ‘poppin and lockin’, which is best known as the Electric Boogaloo.

“A long time ago, my dad used to bring me dance videos when he used to travel to a lot of places, like Germany and France, and I would imitate the dancers in these European dance battles. There is also this old show called Soul Train and there were these dancers called the electric boogaloos. That’s the dance style I do today. And that’s how I got my nickname, Baby Boogaloo,” said Miles.

After being featured on The Ellen DeGeneres Show and becoming a semi-finalist on America’s Got Talent as one of the break dancing duo called Future Funk that is when the then 5-year-old’s dancing career really starting taking off. Miles began performing for NBA halftime shows, including making appearances on several dance competitions and music videos like Chris Brown’s “Yeah 3X”, Aloe Blacc’s “Loving you is Killing me”, and Lego’s “Stereotypes.”

In 2012, Miles started branching out into acting roles in short films and television shows such as The Thundermans, Shameless, and Yo Gabba Gabba.

When asked what he loves more: dancing or acting? Miles stated, “I think I love both. Even though I have been dancing more, I still love both.”

By the end of this year, Miles will also be doing voice over work playing Jack of Jack and Jill in a new animated series, Goldie and Bear, which will debut on the Disney Junior channel. But, in the meantime, Miles enjoys being on the set of Black-ish with his fellow cast mates and also likes playing his character Jack Johnson because, according to Miles, he is “mischievous, hyper, and a smart-aleck that loves to dance.”

“I really have fun working with all these amazing people like Anthony [Anderson], Tracee [Ellis Ross], Laurence [Fishburne] and all the kids on the show,” states Miles, “Hopefully Black-ish will have a season two, but we’ll find out next month.”

For the Oxnard, California native, his ambition holds no bounds. When asked what he plans on doing in the future? He states, “I want to do a rap album, finish school, then go to college, and then be in the NBA. (Laughs) I want to do everything!” Yes, the future does look promising for this child prodigy.

Of course, Miles may have the charm and drive to accomplish more in life, but he hasn’t forgotten that he is still just a kid. Enthusiastically he talks about his favorite video games, which are NBA 2K and the popular Sci-fi video game, Destiny. And he also reveals who are his favorite heroes in music, film, and sports. They are the late Michael Jackson, Robert Downey Jr. (as the Marvel character Iron Man), and LeBron James.


For more updates on the sitcom, ‘Black-ish’, go to: www.abc.go.com/shows/blackish