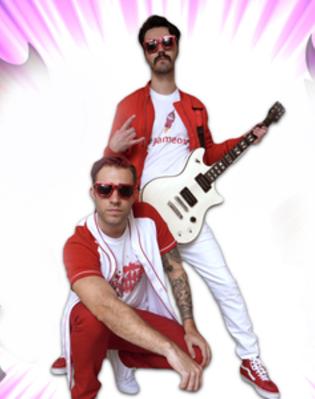 Rockit Gaming founders Russell McKamey aka Rockit and Vincent Newsom aka Vinney Noose are changing up the music and gaming industry in a whole new way!

The Pop duo hailing from Austin, TX are the first of their musical-gifted-kind to create a unique genre of meshing commercial quality music with lyrics themed around video games, cleverly known as: Video Game Pop. Building a solid reputation of constantly writing and producing content, (90 songs a year to be exact), inspired by their fans and being at the forefront of the latest trends in video games and character releases creating, it is no wonder why they have over 36 million views on Youtube and one million+ monthly streams on Spotify alone.

Now if that is not impressive enough, they were recently awarded as the Nintendo of America Brand Ambassadors. But for those that are not gamers, you have probably heard their tunes from such movie trailers as Mission Impossible: Rogue Nation, Edge of Tomorrow, and Death Wish. In an exclusive interview with BCNF, we get to know a little more about these music gaming entrepreneurs such as how they created Rockit Gaming, what is their favorite old school video game soundtracks, and their take on video games becoming more popular than music.


Bridget Campos News Features: How did you guys meet and create your company Rockit Gaming?


RG: We met during our last year at Chico State during a songwriting class. We were involved with numerous musical projects leading up to Rockit Gaming. I (Rockit) began the project in 2015, quickly realizing the potential. I asked Vinny to join the team shortly after, catapulting our ability to create content more frequently. Understanding video games were taking over the world, we decided we wanted to bring this new genre of music to the mainstream!

BCNF: Has this become a new trend of mixing music with video games?


RG: While the genre of “Nerdcore” has been around for quite a while, we are changing the way it’s thought about. Throughout its conception, much of Nerdcore has been comedic parody-like content, as well as nerdy themes. We are taking it to the next level with writing music intended for gamers and non-gamers alike, at a commercial quality. We have a love for catchy hooks, great melodies, and amazing production. Combining these elements make for a recipe that appeals to audiences on a massive scale!

BCNF: What is your process for making songs for a video game? Do you focus on the overall theme of the game or a particular scene?


RG: We try to find a universal theme surrounding the game we are writing about. Because our focus is for the gamer, and non-gamer, it’s important to find a common element that both can relate to. While doing so, we definitely make references about specific things within each game, but make sure it’s done in a clever way to not throw off the vibe of the song.

BCNF: It has been reported you make over 90 songs a year and just within a few years you have over 200 songs on catalog. What is your process for turning out so much musical content?


RG: Shortly put, we are machines. We dedicate 7 days a week to songwriting and video games, which allows for a constant flow of creation. We have the process of creating an instrumental, playing the game, writing lyrics, recording, creating the video, and mixing/mastering down to clockwork at this point. Even though we have a process, we still treat every song with as much respect and care as the previous. More content is often confused with less effort, which I can assure you is 100% wrong!


BCNF: What makes you guys different from composers that create songs for movie soundtracks? Or would you say that Rockit Gaming does the exact same thing?


RG: I would say that Rockit Gaming is setting out to change the way themed music around video games/movies is thought about. Yes, we are definitely similar to composers for movies/games in many ways - but we are coming at it from an artist standpoint with catchy hooks. We believe that catchy songs help drive audiences to a game or movie, and that it elongates their connection to them. If you love a song about a game/movie, the chances are you’ll want to listen to a song that reminds you of it - especially if the song kicks ass!


BCNF: Are there any old school video game soundtracks that inspire you like from Super MarioBros. or Sonic the Hedgehog?


RG: To be honest, not really. Our music is extremely contemporary and molded from what is current in today’s music. This is another thing that differentiates us from previous artists related to us, in that we are write with current audio production in mind.


BCNF: Are there any artists out there in the video gaming world that are doing the same thing you two are doing?


RG: There most definitely are! Our community of “Video Game Musicians” creating Nerdcore content on YouTube and outside of YouTube is spectacular! There are about 10 artists who do this full time on YouTube (many more that are not full-time), including our longtime friends JT Music - who we’ve known for over 10 years. Our group is inspiring so many up and coming artists who are creating this type of content, so we expect an uprising of acts in the coming years!


BCNF: Who would you compare your musical style to?

RG: I would say we are most closely related to Twenty One Pilots. They’ve been called Skitzo-Pop because their songs jump from genre to genre with little to no cohesiveness at all. We consider this to fall true with our music as well, because we mold each song to the vibe of the game we are writing about. One week we’ll write a hip-hop song, the next a rock song, and the next a country acoustic song. It all depends on the game!


BCNF: Are there any video game projects coming soon that you would like to tell readers about?


RG: Last year in May, we did a musical music video for indie video game developer tinyBuild for the E3 Pre Show. But aside from our regular weekly releases, we are talking about touring and taking our presence on the road as well! We have some serious work to do!


BCNF: It has been reported that the video gaming industry is soon to become more profitable than the Hollywood industry? Why do you think people are more into gaming than movies or even music?

RG: The world is turning into a scarier place by the day, and people are looking for an outlet more than ever before. Gaming allows us to be people who we aren’t, and also connects us to people around the world. I am close to many of my friends still because we play video games together on a weekly basis, allowing us to find common ground as we grow up leading different lives. Knowing that video games are so popular, there is no reason to believe that we can’t take music and gaming and bring it to the next level with Rockit Gaming!