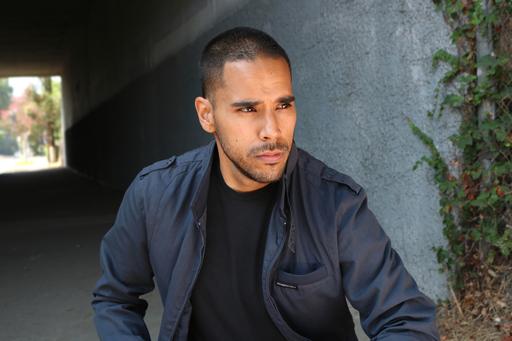 Actor Randy Gonzalez is burning up the screen both on television and movies with his good looks and tough guy exterior. But it was his first love of music that got him where he is today. Originally a guitarist for a punk/hardcore band, Randy, while on tour, was convinced by the singer of his band to get into acting. Eventually he decided to take random acting classes from a craigslist posting.

Before Randy knew it, he starred in several hit shows including, Bosch, The Walking Dead, Transparent, and Graceland. In an exclusive interview with BCNF, the rising star hailing from Miami, tells us about his newest movie roles, including this week’s worldwide release of the action-packed Jennifer Garner film, Peppermint, and why he is the biggest supporter of Latino inspired films.


Bridget Campos News Features: Tell us about the movie, Peppermint. It’s been awhile since Jennifer Garner has played an action role.

Randy Gonzalez: Yeah, her doing Alias, which was an action heavy TV show kind of put her on the map and she got a lot of fans from that. So, it’ll be exciting for fans to see Jennifer Garner back in an action role, like she also did in the movie, Elektra.

Peppermint is a revenge story about a woman’s loved ones wrongly being taken away from her. And my character plays a part in that crime. It’s a very action intense story.

BCNF: Who is Curly in the movie Peppermint?

Randy Gonzalez: My character role who is a hitman for a gang cartel. Preparing for this role was tough. My whole body was covered in tattoos, so every morning I had to be in the makeup chair for over an hour each time I was on the set. But it was also very exciting to do the action scenes, which I love. I especially got to do a fight scene with Jennifer Garner. It’s a very intense opening scene fans should look out for.

BCNF: Was it an easy transition from playing guitar in a rock band to now being an actor?

Randy Gonzalez: Yeah, it was pretty easy because they are both creative outlets. In my head, being on stage with my band and touring all over the country wasn’t any different from acting.

BCNF: What TV show or movie do your fans most recognize you from?

​
Randy Gonzalez: I think Bloodline. I worked on three different seasons on that show.

BCNF: Any actor or director you enjoyed working with on the set?

Randy Gonzalez: I would have to say Ang Lee. He’s a triple Oscar winner that directed Brokeback            Mountain and Life of Pi. It was an honor to work with him in a supporting role in Billy Lynn’s Long Halftime Walk.

Now as for my favorite actor I enjoyed working with would have to be Ben Mendelsohn from Bloodline. He’s originally from Australia and is an incredible actor to work with.

BCNF: You have another movie coming out next year called The Tax Collector. Tell us about it because I noticed the cast is predominately Hispanic.

Randy Gonzalez: The movie is about a tax collector for gangs played by Bobby Soto and Shia LaBeouf is his sidekick character. They are tough guys in this film and my character comes across their path and they have to set me straight. The movie is directed by David Ayer, who wrote Training Day. It should be a very exciting film to see when it comes out.

BCNF: What was it like to work with Shia LaBeouf? Is he as crazy as he is portrayed by the media?

Randy Gonzalez: He’s a nice guy. He’s just intense and really into his craft. That’s the vibe he gives off. I don’t think he means any harm when he keeps it 100. Some see his intensity and think he’s crazy. But that’s not the case.

BCNF: Since you are a strong supporter of Latino inspired films even creating your own film, Amigos, that will be in the Hispanic Film Festival in October. Do you agree with critics that there are not enough Latino roles on TV and film?

Randy Gonzalez: Yes, there aren’t many Latino roles in Hollywood, especially in films. But I think Hispanics should be more involved in creative arts, which would make it difficult for studio heads to ignore the numbers of Latinos that want to be casted in significant roles.

It’s a tough mountain to climb, but we’ll eventually get up there.

BCNF: What advice would you give to Hispanics that want to do acting but feel the odds are stacked against them because of their ethnicity?

Randy Gonzalez: I would say don’t let that hold you back at all and if you really have your heart set out on it then I would say go for it. Don’t let your skin color or gender stop you. Sometimes writing and shooting your own work can help get your voice heard.


'Peppermint' is out in theaters now​