You could say Mark Kubr has quite the life in his line of work, but what makes it even more interesting is how his career path began. Growing up in Orange County, California Mark worked at a supermarket near his home as a grocery bagger when he was just out of high school. It was Jean DeWitt (the voice of Wilma Flintstone) that saw the potential Mark had to be a model or get some acting work. Soon afterwards she got Mark an agent and right away he was doing commercials and print ads as a model.

But Mark’s love of being on the set pushed him into another career path—stunt work! Over the past few decades, the Calfornia native has been in several action packed thrillers such as Furious 7, The NiceGuys, The Lone Ranger, Snakes On A Plane, and

Captain America: The Winter Soldier. Mark and his

stunt team were even nominated A Screen Actors

Guild Award for Outstanding Performance by a

Stunt Ensemble in a Motion Picture for the 2008


In a recent interview with BCNF, Mark talks about

his recent work on the Oscar contending film La La

Land, being a body double for Mickey Rourke, the

responsibilities of being a stunt coordinator, and

his love for teaching others how to surf.

Bridget Campos News Features: You first started off as a model, then photographer and now a stunt man. What made you want to make a career change?


Mark Kubr: When I was modeling what really interested me the most was the photography part of it. I was fortunate to work with the greatest photographers like Herb Ritts. I was starting to take my camera to the modeling shoots and taking all these behind the scenes stuff. I eventually got good enough that I did a couple of catalogs on my own. I like movie making, acting, modeling, and photography.


What led to me doing stunt work was when I was in the Flintstones movie and they had to get a stuntman for me. I asked the director, what does my character have to do in this movie? He said the scene involved charging through a door. I thought to myself, I can do this. Then I asked the director to please give me a shot at this, and he did. That is when I started doing stunt work after that.


BCNF: What was the experience like working with Emma Stone and Ryan Gosling for the opening dance sequence scene for La La Land?

​
Mark Kubr: It was amazing. I’ve worked with a lot of established actors, but to work with director Damien Chazelle, dance choreographer Mandy Moore (From FOX’s So You Think You Dance),                   Emma, and Ryan you better have your A game dialed in.

BCNF: I heard that there were over 100 dancers in that sequence scene


Mark Kubr: Yeah, there are also BMX bikes going all through the dance sequence. So me and Mandy had to figure out how the stunt scenes would coordinate with the elaborate dance scene, which I

honestly don’t believe has been done before. This was a great task to be a part of.


BCNF: Was there ever a time in stunt work when things got too dangerous on the set?


Mark Kubr: As in I walked away?


Mark Kubr: No, once you start doing better movies there is a lot of safety meetings and safety personnel everywhere, and safety precautions. Sometimes it’s the small details that scare me. I once stunt coordinated for a show called House of Lies. There were these fight scenes where a person might have to go through a glass or a table. So you have to work with the construction guy and hope that the piece breaks away perfectly in the scene and hope that no one gets seriously injured. And those are the details that scare me the most in my line of work.


BCNF: You’ve worked alongside so many talented stars. Who in your eyes is a badass?


Mark Kubr: Without hesitation Russell Crowe is a badass. By the way I was told not to cuss (laughs). And also Mickey Rourke, I was his double for years. In my eyes these two guys are bad asses.


BCNF: What exactly does a stunt coordinator do?


Mark Kubr: A stunt coordinator brings everything together. So when I work on a movie as a stunt coordinator I have to hire a driver, Parkour, skateboarder, a BMX rider, or a gymnast. You put everything together, whether it is a fight scene or a car chase scene. You work alongside the director to make sure you both agree on the vision. A lot of it rests on you to hire the right person as the coordinator. He is like the director of action.


BCNF: How does it feel for you as a father that your son, Vladimir, has taken an interest in stunt work as well?


Mark Kubr: I think it is fantastic. My son started stunt work when he was four-years-old. It’s such an interesting story. When I was in my car with my son one day, I get a call from Tommy Harper, he is a very well-known stunt coordinator. He asked if my son can be a in an action scene where the child will be in a back car seat on an LA freeway. And the car will be tossed in the air and just before it’s about to crash to the ground Iron Man catches it just in time. So I took a picture of Vladi while he was in his car seat and he ended up getting picked for his first stunt scene. So it was pretty cool.


BCNF: How long would you like to continue doing stunt work?

Mark Kubr: I love the energy of film making. The whole process is what makes sense and I love to continue as long as I can.

BCNF: Since you are athletic what is your favorite water

environment and the closest thing to nature, kind of like

BCNF: You have also taught several celebrities how to surf. In all honesty, who was the easiest to teach and who was the most difficult when it came to learning?


Mark Kubr: Oohh…that’s going to put me on the spot (laughs) I won’t say

who was the most difficult, but I’ve taught a lot of celebrities. It’s a very

interesting sport. The waves are moving, you’re moving, the surfboard is

moving, and the water underneath is moving too. So if you are teaching

a whole different environment. So what I do is start them off small and put

them on a big surfboard and let them stand on their first wave. I paddle

on the board and that’s how they start. The teacher and student relationship

really brings us together from Valerie Bertinelli, to Gerald Butler, and many


BCNF: What other films can readers expect to see you be a part of in the near future?

Mark Kubr: Aside from La La Land I’m also doing a low budget film called Kook. And I am also a part of the remake CHiPS that will be out next year.

Be sure to check out the highly anticipated, musical drama/comedy, ‘La La Land’, that is open in selected theaters today

On the set with La La Land  director Damien Chazelle 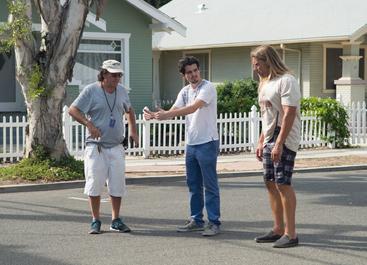 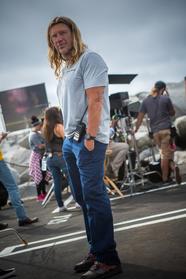 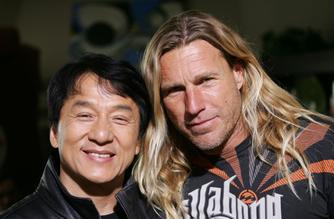 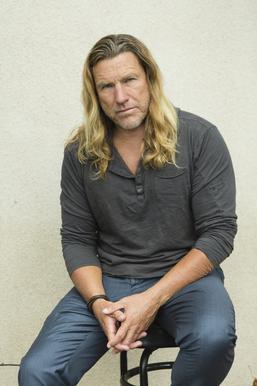