How a fear of public speaking lead to a successful acting career!

Geovanni Gopradi has certainly come a long way from the nervousness and anxiety he would feel from talking to a crowd of people. You have probably seen the Floridian native in such TV shows as The          Good Wife, True Blood, and Major Crimes just to name a few.

But aside from acting, another passion that is near and dear to his heart is being an advocate for those with special needs. Having an aunt that has a mental disability and during the early stages of his acting career living with a mentally disabled friend really opened his heart and mind to understand the ins and outs of assisting someone with special needs.

BCNF recently talked with the 34-year-old about joining the cast of The Haves and the Have Nots, the experience of working alongside Tyler Perry, and how he became a celebrity ambassador to the Special Olympics.

Bridget Campos News Features: How did your acting career start?

Geovanni Gopradi: I was in the process of going to law school and becoming a lawyer. But I was battling stage freight and social anxiety. And it just seemed like acting was the right thing to do at that time in order to overcome those obstacles; then one thing lead to another after I graduated from college as well as from a conservatory school. Knowing what I know now, I gave myself an unrealistic timeframe to accomplish something in my acting career. I just needed a sign that I could turn art into a career and here we are.

BCNF: How does it feel to be apart of one of the most popular shows on cable TV, The Haves and the Have Nots?

Geovanni Gopradi: It’s really a TV show suited for adrenalin junkies like myself, because of the fast-pace that Tyler Perry films. I mean, he is insanely fast when it comes to recording an episode! Tyler films an entire episode in one day and handles all the writing and directing himself. He has three cameras while filming and edits as he is directing. He’s a creative machine.

BCNF: You mentioned Tyler Perry is a fast-paced director. I could imagine it feels intimidating to be in that type of environment.

Geovanni Gopradi: Now I have worked on soap operas before both on Spanish and daytime soaps but working with Tyler is a completely different experience that really puts your acting skills to the test. There is a lot of stop and go. No time to think or process information. You must be ready and rely on your instincts or improvise if the need be. It’s the closest I felt to being live on stage in theater. It’s just a continues thing, so there isn’t must room for errors or retakes or even downtime in between shots. But in a way it brings out the best in actors and it’s a lot of fun.

When shooting my first episode, I was not prepared for how fast it was going to be. Somewhere during my scene, I completely blacked out and had no idea what I was doing and in the end all I could do is apologize to Tyler Perry. But he told me, 'You did great!' At first I was contracted to do only seven episodes but eventually it got extended to 24 episodes. So I am grateful that my character is still alive on the show.

BCNF: Tell us about your character from the show named Broderick.

Geovanni Gopradi: He is an immigrant that is eager to acquire the American Dream through questionable methods. He wants to make fast money by taking short cuts and in the upcoming episodes we will see the consequences of him taking such a path.

BCNF: What was it like to work with a great cast of actors on popular shows and films like Tika Sumpter, John Schneider, Kevin James, and cast members from Will & Grace?

Geovanni Gopradi: They all taught different things like being with the Will & Grace cast was such an amazing thing to be a part of since it was such a huge show with 16 Emmy wins. And after many years of being off air they comeback and rock the house and do so well at catering to their fans. It was a great experience and different because most of my career has focused more on drama. So being around comedic geniuses was memorable and I learned a lot from them.

BCNF: Do you feel that having a successful acting career that you have conquered your fear of public speaking?

Geovanni Gopradi: It’s a funny thing, most people think that actors don’t have stage freight. I was recently on a discussion board at UCLA for the Special Olympics, and I thought I conquered my anxiety in public speaking but that wasn’t the case. It was difficult, but mid-way during my  speech I started to feel more comfortable. Back then I would not have been able to do that before my acting career. But acting has helped me work on this. I’ve come along way.

BCNF: Besides acting you are also an ambassador of the Special Olympics. How did that happen?

BCNF: Will we see you at the U.S. Special Olympics in Seattle this summer?

Geovanni Gopradi: Yes, the Special Olympics asked me to present all the awards during the event and be at the opening ceremony. I’ll probably participate in someway at certain relay events. So I’m excited about that.

BCNF: Tell us more about your participation in “Spread the word to end the word” in relation to the R-word.

Geovanni Gopradi: It’s a campaign that is basically trying to eliminate that derogatory word: retarded. It used to be a term used in medical journals and has since then been removed. However, since it has been apart of our culture for some time. It is used in a demeaning and cruel way to describe an everyday scenario that might seem stupid or it’s directed towards a person in a negative connotation. And ‘Spread the word to end the word’ helps educate people that are unaware the effect it has on our community. Hopefully it will help someone to think before they speak and empathize with people facing mental challenges.

BCNF: What other films or projects can readers expect to see in?

Geovanni Gopradi: I am in the process of directing a couple of films. One is a short film and it’s a very artistic piece with lots of drama, music, and it involves all the senses. I hope people will really like it.

Watch the ‘The Haves and the Have Nots’ every Tuesday at 9PM on OWN or see full episodes online at Oprah.com 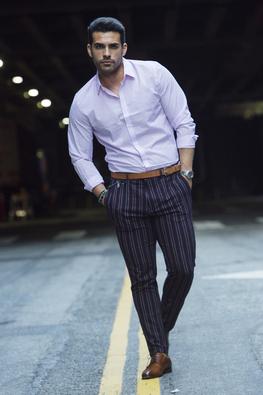 Geovanni Gopradi: Interview with the Co-Star of Tyler Perry’s Drama series ‘The Haves and the Have Nots’