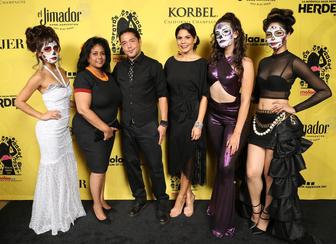 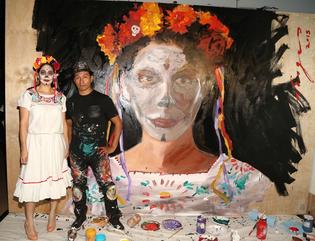 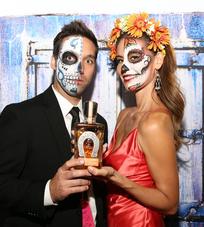 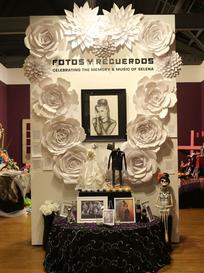 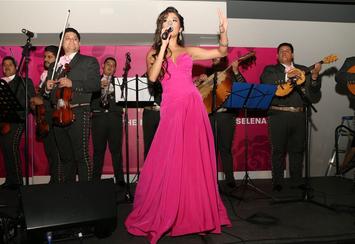 The Museum of Latin American Art (MOLAA) and Siempre Mujer Magazine celebrates the day of the dead in a touching tribute to one of the most iconic artists in the world of Latin music, the late Tejano singer, Selena

The second annual Dia de los Muertos gala event was hosted in Long Beach, Ca on Oct. 30th at the Museum of Latin American Art. The night was filled with many guests dressed to the nines in full Dia de los Muertos attire. Women wore beautiful flowing dresses and a scarf wrapped around them with flowers in their hair, or adorning a black veil around their face to fit the occasion of honoring the dead. While the men wore nice suits with a tie and for some a top hat.

At the event, guests both young and old, got complimentary face painting, consisting of a skull (or in Spanish it’s called calaca) with a variety of colorful flowers, and other vibrant, artwork designs such as a cross or spider’s web.

For those unfamiliar with Dia de los Muertos, it is a Mexican holiday that is celebrated on November 1st and 2nd and ties in with All Souls’ Day, which originates from the Catholic religion. This is a time when gatherings are held to remember family and friends that have passed away. Though death is considered to be a time of mourning for some; in the Mexican-American culture, they however joyously celebrate the passing on between life and death with festivities involving food, music, and dancing. Of course, MOLAA’s gala event did not come short of its celebration of honoring the dead. Guests dined on chicken enchiladas with mole sauce and lime infused rice on the side, including skewered blueberry marinated pork carnitas; as well as, shrimp ceviche on mini tostadas with a spicy chipotle crème fraîche on top, and also, a specialty drink of strawberry margaritas courtesy of the event sponsor HERDEZ brand.

ABC7’s Vista L.A. host Patricia Lopez emceed the event and welcomed on stage the mayor of Long Beach, Robert Garcia, and MOLAA President & CEO, Stuart A. Ashman. The two men thanked guests for attending the event and reminded them about the silent auction consisting of Selena artwork and various entertainment experiences such as touring DreamWorks studio all for the sake of fundraising to help support MOLAA’s exhibitions and art education programs.


Attendees also got to enjoy live music at the museum’s outdoor garden by Va Por Ti finalist, Virginia Stille, and Mariachi Garibaldi, including local bands: Thee Commons, Boogaloo Assassins, and Buyepongo. Mural artist, Robert Vargas, (whose claim to fame is painting massive murals on buildings off the corner of 6th and Spring Street in Downtown Los Angeles) entertained an enthusiastic crowd by drawing a life size portrait of a lucky person he picked from the audience as his inspiration.

During the event, Cristy Marrero, the Editor-In-Chief of Siempre Mujer asked everyone to take a moment of silence for those that have recently passed away. After the brief silence, she thanked family members of the late singer Selena for attending the gala, including Chris Pérez (who was the lead guitarist of the Latina star’s band known as Selena y Los Dinos and was married to Selena for three years before she was murdered in 1995 by jealous employee, Yolanda Saldivar, after being confronted by the singer and her father Abraham Quintanilla, Jr. for embezzling money from Selena’s boutiques and fan club). Saldivar is currently serving a life sentence in Gatesville, Texas for shooting the 23-year-old dead.

Though 20 years have passed since her untimely death, the Grammy winner is still making an impact in the world of Latin music. Among the Hispanic community, Selena is seen as the Mexican version of Madonna and Marilyn Monroe, which is why many young girls to this day are still greatly influenced by the Tejano singer’s style, dance, and music. Though in the early 90’s Selena was a rising star in Latin music, she wanted to make an impact in America as a pop star, since she was born and raised a Texas girl. Her crossover album, Dreaming of You, was released four months after her death and to this day remains as the best-selling Latin album of all-time in the U.S. After seeing other Latin artists such a Shakira, Enrique Iglesias, and Ricky Martin make the successful transition into becoming American pop stars, it makes you wonder what could have been if Selena’s life wasn't taken away at such a young age.

That is why it seemed fitting for this Dia de los Muestos gala event to honor one of the most profound and beloved music artists in history. Though Selena has been gone for a very long time, her spirit lives on and will continue to do so for many years to come. 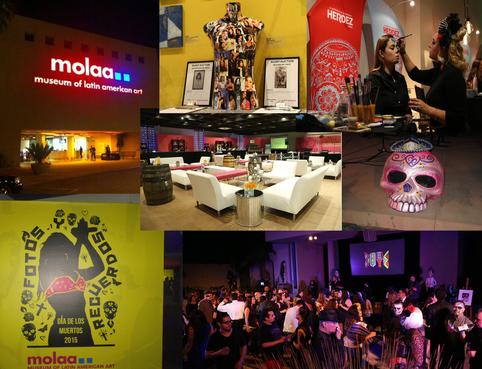