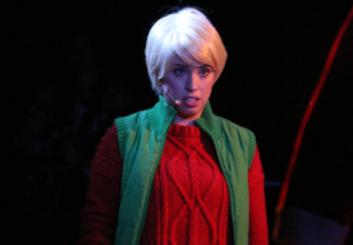 An entertaining musical that really puts you in the Christmas spirit

If you have yet to hear of the movie where a bratty eight-year-old is left home alone to fend for himself, while having to take on two bumbling burglars, then you need to add Home Alone  to the rotation of past time Christmas films to watch during the holidays.

Filled with many memorable one-liners and hilarious scenes, this 1990 classic is written and produced by none other than the late John Hughes. Not only is Home Alone  considered to be the number one-grossing box office-holiday-film of all time, it also launched the then unknown Macaulay Culkin's movie career; and he was reportedly paid $4.5 million for 1992 sequel, Home Alone 2: Lost in NewYork,  making him the highest paid child actor during that time.

And who better to take on an all-time classic Christmas film, but giving it their own spin, is none other than Executive Producer and creator of the UMPO series, Kate Pazakis, and her creative team at the Rockwell Table & Stage in Los Angeles, CA. With a list of many other popular unauthorized musical parodies such as Mean Gurlz, The Big Lebowski, Clueless, and Jurassic Park (which will be out early next year), the parody of Home Alone has returned for its second year and fans are thrilled about it.


When the cast is not making you burst out in laughter, they'll have you humming to the live holiday music they're belting out. Some of the most popular Christmas tunes include "Santa Baby", "Rockin' Around The Christmas Tree", and Mariah Carey's "All I Want For Christmas Is You." Also, some 80s music and songs from your favorite artists like Adele, Christina Aguilera, and DJ Khaled.

Gina D'Acciaro, who plays Kevin's mom, Kate McCallister (originally played by Catherine O'Hara), shows off her great musical range and really takes the lead when it comes to the hilarious scenes in the musical. Also, Nohley Quiroz and Sarah Wolter's female version of the dumb burglars Harry and Marv (originally played by Joe Pesci and Daniel Stern) is wonderful. And let's not forget the star of the show Kevin McCallister (played by Natalie Lander, who is best known for her roles in The Middle, Lopez, and Goldie and Bear). Lander really does a great job at playing the precocious little boy and shows great comedic timing. I guess it runs in the family since her father is David L. Lander, best known as Squiggy from the iconic show, Lavern & Shirley.


Bear in mind it is a musical parody for adults, so there is quite a bit of tongue and cheek humor and a swear jar used often throughout the show. But what is most amusing about the UMPO Home Alone is the low budget production and oversized props, especially used towards the end of the show where Kevin goes up against the "Wet Bandits" to prevent them from robbing his family's home. In one scene when Kevin uses a zip-line to his tree house to escape the crooks, they literally used a doll dressed up like Kevin that's pushed to the other side of the stage using a clothesline string. It's the little things like that that really add to the charm of the musical. So head on over to Rockwell Table & Stage--relax, have a drink and enjoy the show, "ya filthy animal!"

The Unauthorized Musical Parody of 'Home Alone' runs throughout the end of the Holiday season (December 30th.) To purchase tickets go to:http://tickets.rockwell-la.com/ 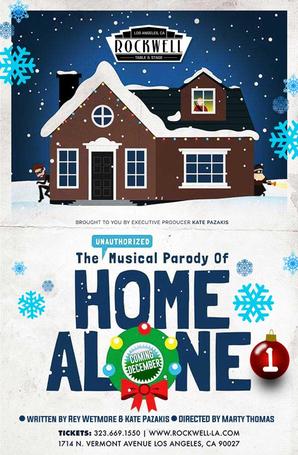