The annual Coachella Festival is best describe as a time where hipsters, celebrities, and indie-rock lovers all flock to the desert to hear music from their favorite artists rocking the airwaves like The Weeknd, Eminem, and Queen B herself Beyoncé, who was in fact supposed to be at last year’s festival but had to bow out after announcing her pregnancy with twins; daughter and son Rumi and Sir Carter, which caused Lady Gaga to headline the event; but even artists from all genres that are relatively new to the music scene.

Yes, attendees come to Coachella not only for the music, or to space out on the artsy décor and stage lighting from the performers at night, but most importantly for the fashion!

In honor of the most popular music festival in Indio, California, Ok! Magazine and environmentally-conscious hair coloring product SPLAT teamed up to celebrate Coachella and in such stylistic fashion at the trendy EDEN by Eden Sassoon in West Hollywood last week. Female guests got the chance to have professional hair and makeup artists refresh their look with beautiful pastels colors to streak their hair and foundation or eye shadow to gives the ladies ideas for how to put together their look for the festivities at Coachella.

Hosting the get together was Shameless and Roseanne co-star Emma Kenney. The Manhattan born actress gave BCNF the inside scoop of working on the new Roseanne set. “It’s amazing to be apart of an iconic 90s family and to play Darlene’s daughter is just insane. I’ve learned so much. It’s been really cool”, said Emma.

Since being off the air for close to 20 years, the Roseanne show made a sudden return this year with most of its original cast and has dominated the ratings with 18.4 million viewers on its premiere date on March 27, 2018 after airing two episodes back-to-back. The show was such a hit that even President Trump wanted to take credit for the show’s debut success. Though being a strong advocate for President Trump, the comedic legend set the record straight to reporters recently regarding the show’s success, Ms. Barr said with a grin, “It’s all me.”

Of course, the Emmy winning star has had her share of controversy and has never back down when it comes to speaking her mind, much like her character on the Roseanne show. But Emma, who plays Roseanne’s granddaughter Harris Conner-Healy, revealed that there is a softer side to the iconic star. She stated, "[Roseanne] is great. So maternal and kind on set. We even have the same taste in cheese.” (Laughs)

The young actress seemed on top of the world at the “Desert Vibes” event, so it was shocking to hear yesterday that the 18-year-old is seeking treatment for an unspecified substance abuse. First making the announcement on Twitter then through a spokesperson about temporarily going offline but assured her fans that she will be back. Co-star Sarah Gilbert, who play’s her mother, Darlene Connor, on the Roseanne show praised Emma for getting the help she needs on a recent episode of The Talk. “I know that the whole cast and crew are so proud of you. And it takes a lot of courage to – we all have demons – it takes a lot of courage to face them, particularly at eighteen…Thank you for speaking out and being an example for other people,” said Gilbert.

Hopefully Emma’s recovery will put her in a better state of mind and body when the Roseanne show returns to production in August for Season 2.

But on a lighter note, Coachella festival is a time to celebrate music and have fun while doing it, at least for those that got the chance to attend since tickets sold out within days of being released in June of last year. If you didn’t get tickets, not to worry, you can still live stream the first weekend of the event (April 13, 14, 15) on Youtube. Now as for viewing the festival online for the following weekend (April 20, 21, 22) you’ll just be out of luck. But there is always next year.

Guests get all dolled up at Eden Sassoon in West Hollywood, Ca. Photo by: Tiffany Taylor 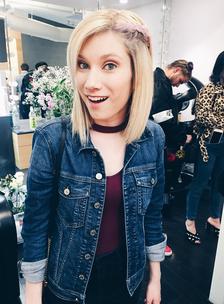 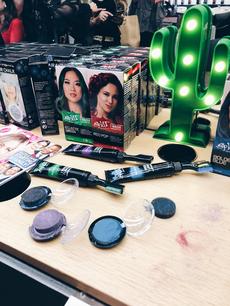 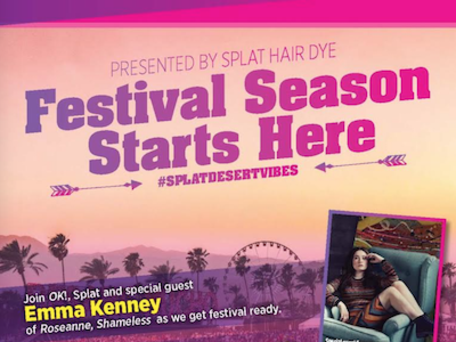